My life in PR, this much I know - martha kearns 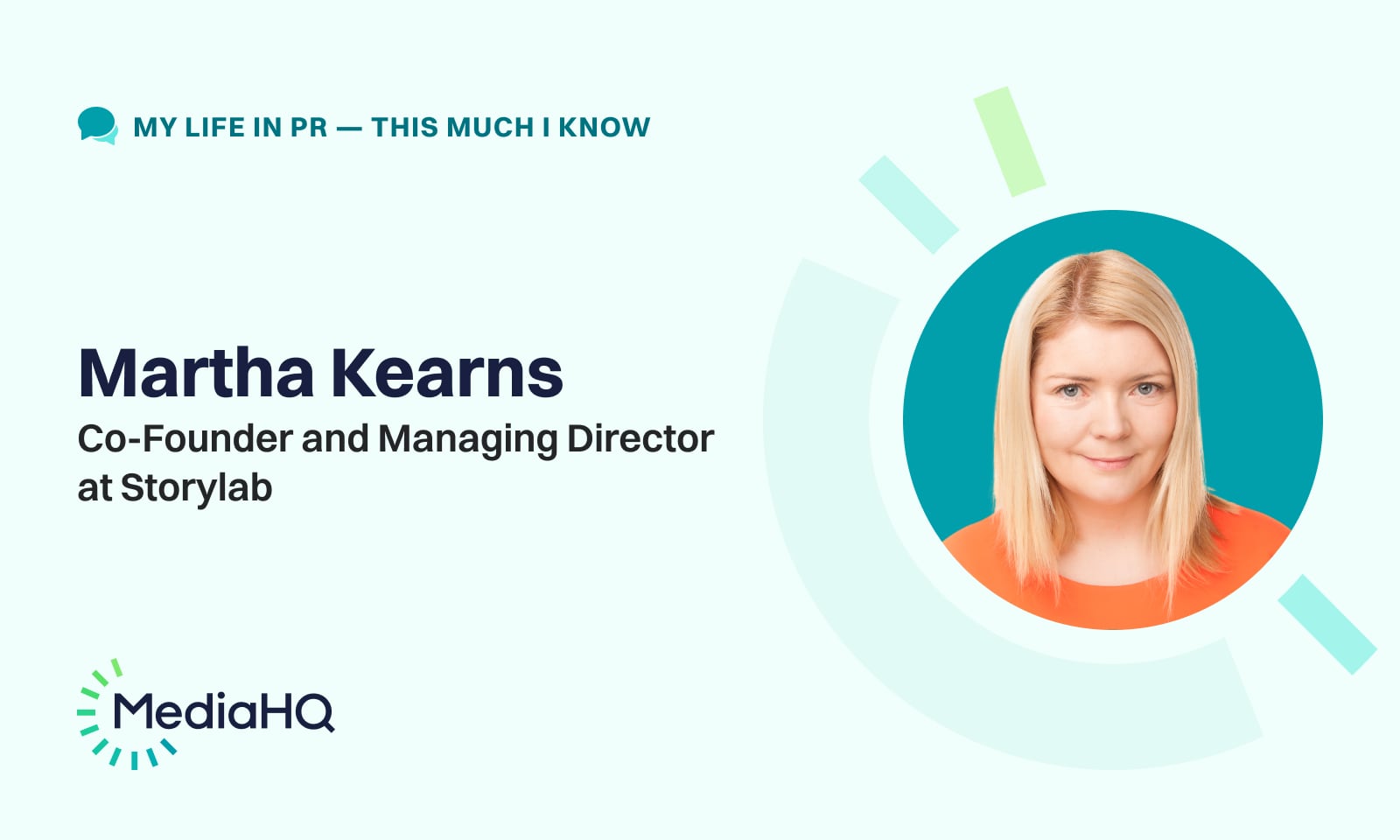 Martha Kearns - My Life in PR, This Much I KnowMy Life in PR – This Much I Know, is an interview series that talks to PR professionals about their career journey and what they’ve learned along the way. From the innovation that they wish they had invented, to their favourite books and mentors who have left a lasting impact. This series covers more than just career advice and takes a look at the person behind the title. Martha Kearns is Co-Founder and Managing Director of StoryLab. Martha obtained a degree in Journalism from TU Dublin, (formerly DIT), and graduated in 1996 going straight into a placement role with Independent News & Media. After her placement, Martha stayed on at the media outlet for almost 12 years, working as Senior News Reporter and Assistant News Editor in her time there. From 2008 to 2014, Martha worked as News Editor at The Business Post and in 2014, pivoted her career to PR, co-founding the content, PR and social media company StoryLab with her husband Ciaran Byrne. Below, Martha dives into her career so far, the three biggest lessons that working in PR has taught her and the work tool that she couldn’t live without.

MacBook Pro. It went from a sometimes-used laptop while travelling to the entire focus of my work life while working from home during Covid-19 restrictions.

There are just so many! But if I had to pick one it would be Hamnet by Maggie O'Farrell.

From primary school, all I ever wanted to be was a journalist and writer, and I used to write mini 'books' at home as well as match reports from Sligo GAA and Shamrock Gaels (our local club) games. I was fascinated by the whole world and, as a career and a lifestyle, it didn't disappoint.

I don't think I'd change a thing. Learning from mistakes is all part of the fun.

Discover the story at the heart of what you are trying to communicate and tell it simply and clearly without any jargon.

What are the 3 biggest lessons that you have learned throughout your career?

Name three principles that you hold dear when it comes to your PR work.

What are your top 3 media relations tips?

I love the buzz of seeing a story I have pitched in the media. It's a similar buzz  I used to get as a journalist seeing my by-line in the Sunday Business Post, Irish Independent or Evening Herald - it never gets stale.

Orla Guerin. Fergal Keane. Huw Edwards. For delivering concise, clear news impartially but compassionately and always getting to the heart of the story.

Who was your first boss in a media related job and what did you learn from them?

My first boss was Brian McHugh, the editor of the Sligo Weekender, who took me on during the summer between my first and second years in my journalism college course. He gave me great responsibility and autonomy which led me to being proactive and self-starting in my work. At the Irish Independent and the Evening Herald, my bosses and colleagues who inspired me are too many to name individually but Evening Herald legend news editor Martin Brennan taught me how to write stories under serious pressure - sending them line by line to the printers as the presses were rolling - while he stood over my shoulder! At the Sunday Business Post, the trust my editor Cliff Taylor placed in me as News Editor to make autonomous decisions solidified my confidence in my leadership abilities.More about Martha KearnsTwitter:@marthakearnssLinkedIn:https://www.linkedin.com/in/martha-kearns-3688546b/‍