My life in PR - yvonne judge 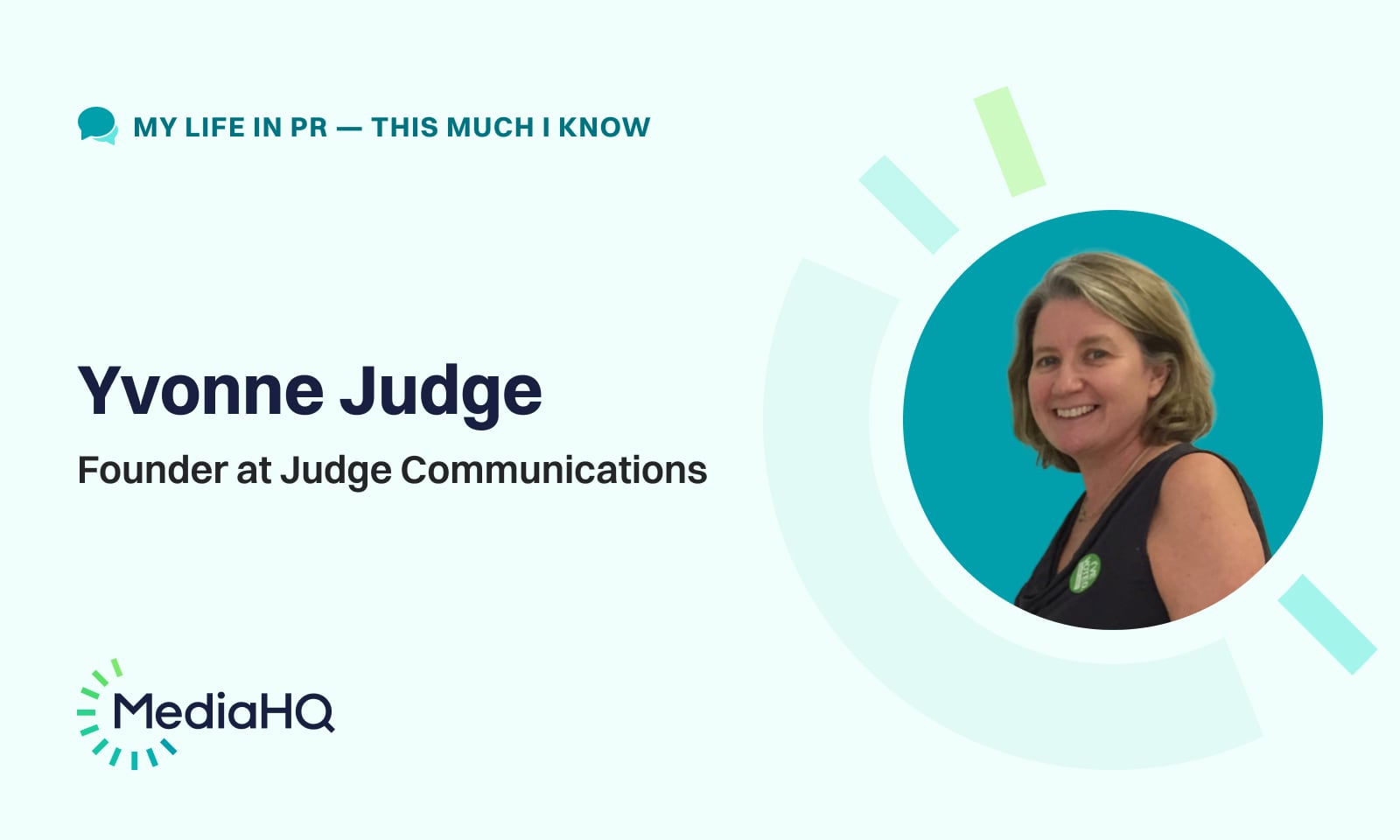 My Life in PR – This Much I Know, is an interview series that talks to PR professionals about their career journey and what they’ve learned along the way. From the innovation that they wish they had invented, to their favourite books and the biggest challenges that they face on the job. This series covers more than just career advice and takes a look at the person behind the title.Yvonne Judge is the Founder of Judge Communications, a public relations agency based in Dublin. Yvonne graduated from UCD in 1986, where she obtained her degree in Greek and Roman Civilisation. In 1989, Yvonne completed a post-graduate course in International Marketing at the University of Southern Maine and qualified with a postgraduate degree in European Journalism from Fondation Journalistes En Europe in Paris. Yvonne’s career began in 1990, when she worked as a sports and feature writer for the Irish Press Group of Newspapers. In 1995, she joined RTÉ and worked as a presenter and producer across various radio shows including the Marian Finucane Show, the Tubridy Show and the Gerry Ryan Show. In 2011, Yvonne was appointed Deputy Head of RTÉ 2FM. Yvonne worked on the communications team for the Yes for Equality and Together for Yes campaigns in 2015 and 2018, before founding Judge Communications, where she currently works as a Communications and Media Consultant.

Name the one work tool that you couldn’t live without.

A lifelong curiosity for stories, storytelling, writing, listening, and an obsession with news and current affairs.

What are the three biggest PR challenges that you face?

1 - There is so much white noise.2 - Everyone's low attention span.3 - The speed with which news and social media whizz past. There is an increasing danger of everything being reduced to a culture war. Life is nuanced. Listen to others opinions, they won't hurt you, they will inform.

The Marriage Equality referendum seven years ago yesterday. I have never been more proud to win a  campaign. In equal parts, the Repeal referendum in 2018.

If you aren't interested in the story, do not expect anybody else to be.

What are the three biggest lessons that you have learned throughout your career?

Always carry a notebook and pencil, a bottle of water and start the day with a banana. And try to have a laugh along the way.

Refer to it as Communications permanently.

What are your top three media relations tips?

1 - Try to be decent, most people are doing their best. 2 - Be brief, succinct and interesting. 3 - Be patient, but always follow up and be flexible.

After years as a print and broadcast journalist, I now work in comms to try and make a difference. We can all do little things to make Ireland a better and fairer place for everyone to live in. It sounds corny but really I mean it. Also that you can be innovative and entertaining. It's showbiz folks.

As a young aspiring reporter, Olivia O'Leary was such an inspiration. A forensic interviewer and wonderful writer. Also the great Maeve Binchy who dealt effortlessly and lightly with substantive issues in The Irish Times. Both women paved the way for enormous social change in Ireland. We were all trotting after them.

Did you have a mentor? Who were they? And what was the most important thing they taught you?

My first editor was John Redmond, Sports Editor in The Irish Press and a great mentor and touchstone. He gave me a real break as a woman writer in sport and encouraged creativity. 'Don't be part of the pack,' he would warn. So wise.More about YvonneLinkedIn: https://www.linkedin.com/in/yvonnejudge/Twitter: @yvonnejudge