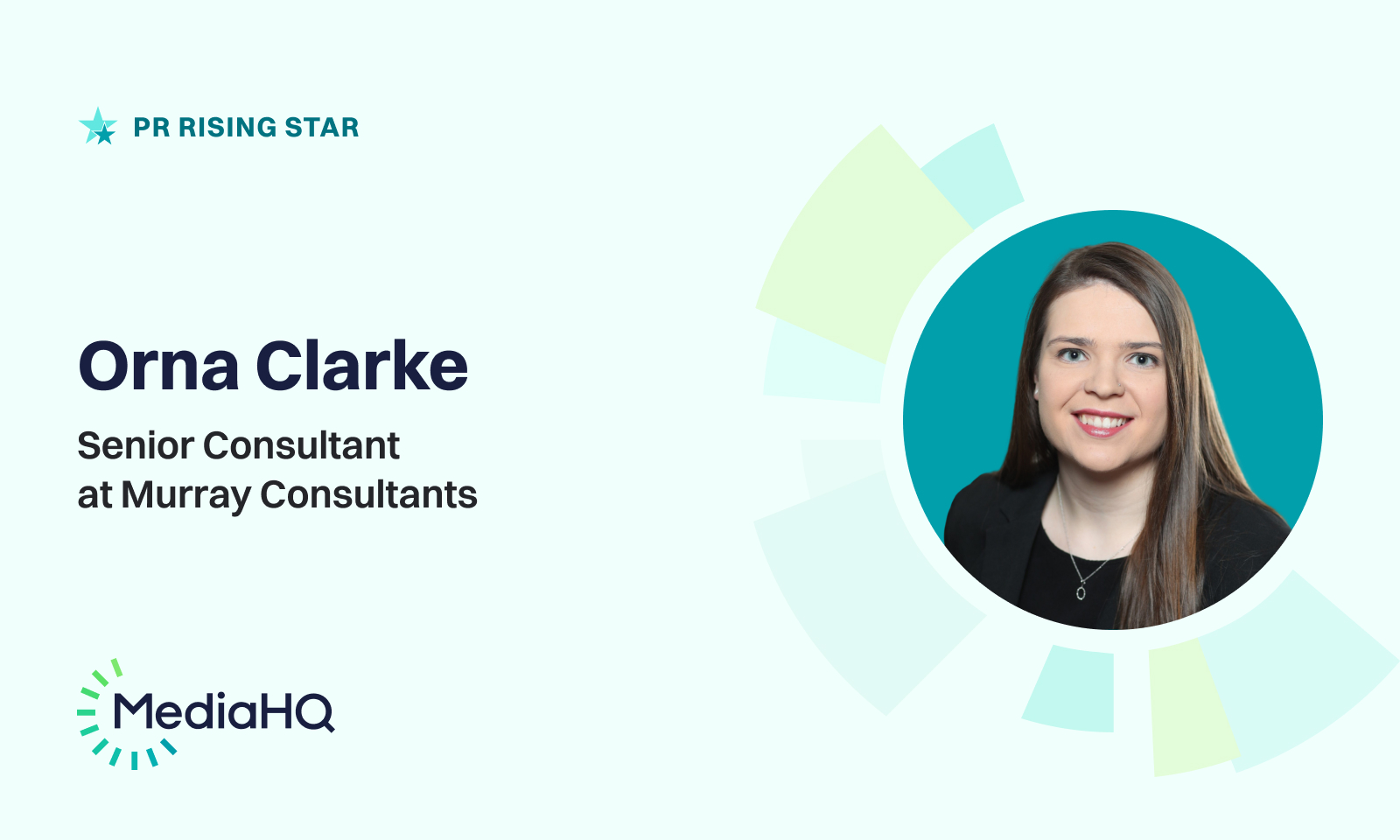 Orna Clarke is a Senior Consultant at Murray Consultants and PR & Comms Officer at Marketing Society of Ireland's Future Council. Orna studied English with Drama in UCD, finding a passion for PR while running a friend’s election campaign in her time there.

In 2017, Orna joined Murray Consultants as an Executive and was appointed as a Senior Consultant in January 2022. Orna is also a PR & Comms Officer at Marketing Society of Ireland's Future Council.

Orna explores her route into the PR industry, the people who have had the biggest influence on her career and the lasting change that she would like to see in PR.

I was introduced to PR by a happy accident through being a massive Harry Potter fan, becoming the founding Public Relations Officer of the UCD Harry Potter Society while I was studying English with Drama there. That led me to managing the PR for a friend’s election campaign for the Student’s Union.

I found myself at a bit of a loose end when my degree was finishing up – I knew I didn’t want to continue studying but wasn’t really sure what I wanted to do as a career. I really enjoyed the bit of PR experience I’d gotten, so I decided to apply for internships in the area and see where that took me.

I applied for a number of internships and entry-level roles in PR after finishing college and was fortunate enough to be taken on for an internship in consumer PR. At the time I didn’t see my background in English and Drama as an obvious route into the industry, but it definitely helped me to develop my instinct for communication, which is still at the core of everything I do at work.

No day is the same – I don’t think I’ve ever been bored at work since I started in PR.

I think imposter syndrome is widespread and can really hold us back from flourishing, especially when we’re starting out, so I think it’s important for early career professionals to have access to industry leaders on a more human level. That’s what we’re trying to do with the Marketing Society of Ireland’s Future Council, which I’m the Public Relations Officer for.

I’m going to cheat here and pick two, but I’ll be forever grateful to have worked with Aoibheann O’Sullivan and Mark Brennock, former Directors at Murray – I was constantly learning from them, even when I didn’t realise it.

My phone – I think people from my generation can cringe at the idea of ringing someone up in fear of annoying them. But I’ve found that you can sell someone on an idea, or find a resolution to a problem, much more effectively by just picking up the phone and having a conversation with someone, than by going back and forth over email.

I’m privileged to have gotten to work with some amazing clients, but getting to be a part of the team executing the Referendum Commission’s public information campaigns since joining Murray has been a stand-out for me.

Understanding what gets them out of bed in the morning.

Since college I’ve often found myself unmotivated to read – I can't stop myself from writing an essay about a book in my head as I read it – but I was totally captivated by As the Smoke Clears by Zoe Holohan.

Ozark – I almost don’t want the final episodes to come out because that means there will be no more of it.

Current trends that I see accelerating over the next five years are the importance of user-generated content; the use of virtual reality to engage with audiences; and the increase in demand for authenticity and openness around previously taboo subjects.

For clients, it depends on where their audience lives and what they’re trying to say. Personally, Instagram is where I can see a mix of content about my favourite celebrities and interests, as well as from people I know 'IRL'.

The huge importance we place on reach figures – they serve a purpose, but there are so many other metrics we can use to measure the impact of PR qualitatively, not just quantitatively.